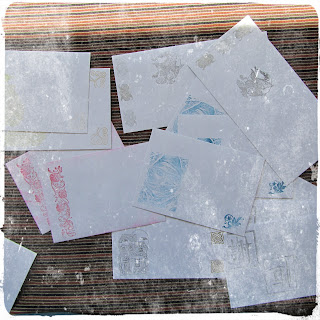 Today I thought to make my own envelopes.. I was inspired by a group at facebook where they made a lot of envelopes lately.. I hope you'll like those.. and maybe you'll receive one of those.. Think I have to buy some A5 envelopes to make for my slam swappers.. ;) I only made A6 size so far.. 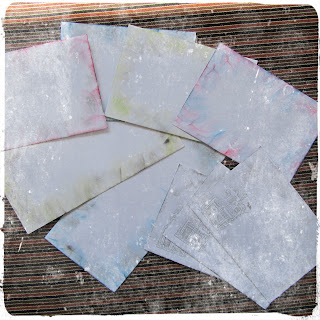 Jonna asked me some questions via a game and I thought of answering them.. (sorry, for this late post).. As I don't have a lot of blog friend (most are on lj) I decided that I won't tag anybody.. so here are the questions: 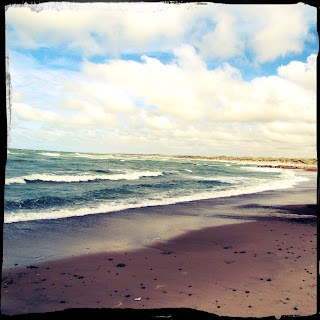 1. What do you usually do in rainy days?

On rainy days I'm mostly inside the flat, playing board games, reading, playing with Thordis, relaxing, watching tv, things that I love to make..

2. What is your favorite time in the year and why that?

Thats for sure christmas time or winter. In winter it is so nice, that it gets dark very early (I like that), I love the smell of snow and I am in wonderland when the snow is fallen. I could even cry because I am so happy of that. :) I just looove snow. Sad that it doesn't snow here very often, last year not one day. :( And christmas time is fun and time for family. :)

3. How do you pick up the next book to read?

Sometimes I let my family decide what I should read next, or if it is a series, than I'll chose those books or only my mood is picking up the book.

5. What is the best memory from your childhood?

Hm, I couldn't remember a lot of things, but it was the time we were playing outside.. playing with Playmobil in sand or playing horses on the playground.. such things I loved.. :D

6. Where do you usually write your letter's?

Nowadays I'm writing my letter on the table in our dining room, but sometimes I'm writing them in bed to have nobody around..

7. What is long letter for you? How many page's? Front and back or only front?

8. What is your bravura in the kitchen?

I don't have any.. maybe only the Topfenkolatschen, but I think everyone else can do them..

9. Who is your favorite character what it come's to books? And why you like her/him?

Severus Snape.. I absolutely liked this character.. He is so magical and you didn't know until the end if he is a hero or a villain..

10. What is your favorite place in the world? And why?

My home.. I absolutly love to be here. It is calm and close to the forest. Sad that we have to move soon. :(

11. What five things you would bring with you in the desert island? 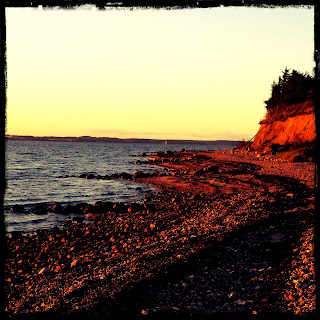 As you might have known we were in Denmark this summer. We have rented a house at the Limfjord and spent two weeks there. In that time we've seen quite a lot and we also went for some geocaching. We have been to Norre Vorupor (at the North Sea), the island Fur, a flowerpark, Skive, a living history museum and an aqua zoo. The beach was really nice. 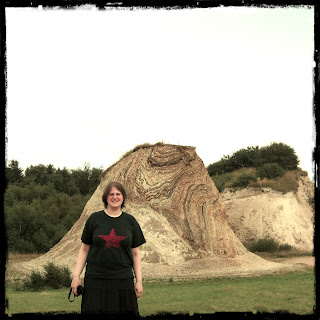 In Denmark we have found around 40 caches, which is a lot for us, but I must admit that we tried to find a lot more. Maybe we are not good at Danish caches or the caches in Denmark are really hard to find. But that wasn't in the caches we've found. Easy to find, some were not hidden or anything. :( That was really sad. They were placed in a ice cream box and you would have thought that there was trash laying in the bush.. :( We have found only traditional caches (we tried a Multi, but couldn't find it).. On the pic you can see me in front of the only Earthcache we've made. 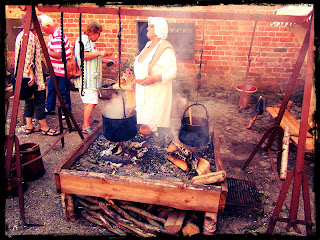 And we have visited a medieval market that was only 3 km far from our house. It was on the Spottrup borg. That is one of the best medieval castles of Jylland. We visited the castle some days before, to have more time. But it was a really nice place for a medieval faire. It was like German faires, but they also had some interesting stalls like selling vegetables, cakes,.. And I also found some new things for my new hobbies like a weaving board for tablet weaving. It needs less space and I think it is also easy to built. I got a link to homepage for a Danish woman, where you can find the pics of thie weaving board: http://brikvaevning.dk/

It was a really nice holiday and I was a big sad when we drove back home. But here a lot of other things are waiting for me. ;) I'm wishing you still a nice summer. 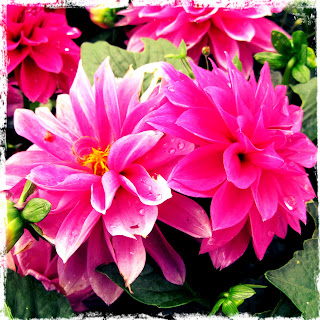